For the romantic in all of us, I combined three essays my dad posted on his original blog in 2011. Then 89 years young, he publicly shared his passion and knowledge of love songs from the Big Band Era. Of course, many already knew this; as a retirement hobby, Harry recorded music collections on audio cassette tapes, and later on CDs, and gifted copies to countless friends. I assume some of you still have them. To introduce each song, he recorded himself narrating bits of trivia (Lawrence Welk style!).

I would say that Harry could feel the power of music, certainly love songs. He was a natural "music therapist." During my mom's last couple of years (she passed away in 2013), with dementia clouding her mind, Dad sang songs to her from their youth, and she quietly joined in, the words ne'er forgotten.

You can click on the song titles in the essays below and listen to YouTube versions. At the bottom of this page, you'll see a link to a clip from one of Harry's recordings.


Everyone in my generation knows who Irving Berlin is, or was, and all of us have heard and know many of the hundreds of songs he wrote. What is not so well known or remembered is the story of his love affair with his wife and the songs he wrote to note its ups and downs. He had been married briefly, in February 1912, but his wife contracted typhoid fever on their honeymoon in Cuba and died in July at the age of 20. For the next dozen years he worked full-time at his craft and became one of America's most successful songwriters.

In 1925 he met a young socialite, Ellin Mackay, 16 years younger than himself. It was love at first sight for both of them. She was the daughter of a millionaire, Clarence Mackay, the head of AT&T, and he strongly opposed the affair. Both were public figures, and the affair was prominently played up in the tabloids -- the immigrant Jewish songwriter and the debutante Catholic heiress. Mackay did everything he could to hinder the love affair, even sending his daughter off to Europe hoping she would forget him while they were apart. When they married in 1926, Mackay disowned his daughter and disinherited her from a substantial fortune. (They were reconciled after a few years as grandchildren came along and the marriage appeared to be permanent.) The marriage actually lasted 62 years, until Ellin died in 1988. Berlin died just nine months later, in 1989, at the age of 101.

During their turbulent courtship, Berlin wrote some of his most endearing torch songs, especially at the times when they were apart. A few examples: All By Myself; What'll I Do (When You Are Far Away); All Alone; and Remember. When they were together and happy, he wrote one of the great upbeat songs of our times -- Blue Skies, which was recorded by all the recording artists of the era. Then, when they were married, he wrote one of the great love songs of our times -- Always -- and gave it to his wife as a wedding present. The royalties from that song alone made Ellin Mackay Berlin an independently wealthy woman. Here are the lyrics for these two ever-popular songs: 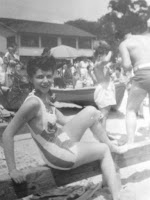 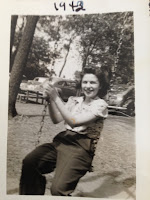 
In 1909, 102 years ago, composer Leo Friedman and lyricist Beth Slater Whitson, wrote a song called Meet Me Tonight in Dreamland. They sold it to the biggest music publisher in Chicago, Will Rossiter, who bought it outright for a rumored $50. The song swept the country, and the sale of the sheet music made the publisher a wealthy man. Although there was no contractual arrangement to pay royalties, it was customary for a publisher who made huge profits on a song to share at least some portion with the writers. Rossiter refused to do so. Understandably unhappy with him, Friedman and Whitson wrote another song in 1911, which they took to another publisher who promised to pay royalties to them depending on sales. That song, Let Me Call You Sweetheart, actually became the best selling song of all time over the past 100 years. Sales of the sheet music alone, millions upon millions of copies and still in demand, as well as recordings by orchestras and singers, made the writers and the publisher independently wealthy.

Here we are, in 2011, 100 years later, and both those songs are still popular. What's the secret of such success? In my view, it's simple words coupled with an easily sung tune expressing a heartfelt emotion that any of us can relate to. So, sing along with me ... 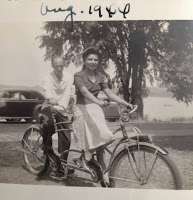 Under the silvery moon,
Meet me tonight in dreamland
Where love's sweet roses bloom.
Come with the lovelight gleaming
In your dear eyes of blue.
Meet me in dreamland,
Sweet dreamy dreamland,
There let me my dreams come true.

Of all the thousands upon thousands of memorable, popular songs ever written, the great majority of them were love songs. And of all the romantic songs of love and devotion, some of the most enduring and endearing were the songs of parting and separation. One such song came to my attention with a back story that tugged at my heart and brought tears to my eyes. I first heard it when Larry Clinton's orchestra recorded it with his songbird, Bea Wain, on the vocal in 1939. It didn't get much play at the time but later, when millions of GIs were going to war overseas, it became a little more popular, and again in 1952 during the Korean War, it enjoyed a revival with a rendition by Jane Russell in a movie "The Las Vegas Story".

It never attained great popularity in the top ranks of recordings, but the words grabbed me from the start and prompted me to look into it. What happened was that someone sent this poem to Hoagy Carmichael and asked if he thought it could be set to music. Hoagy worked on it, made a few changes to the lyric to fit into his melody, and then forgot it. That was in 1937. A couple years later, in 1939, looking through his files he found it again and arranged to publish it, but nobody knew who had written the poem. He and his publisher started a search and advertised in newspapers and magazines to find the author. It turned out to be Mrs. Jane Brown Thompson of Philadelphia, who had written it as an ode to her deceased husband and had it published in a magazine. It was introduced to the public on a network radio program by Dick Powell, one of the foremost singers and movie stars of that era. But Mrs. Thompson never heard it. She had passed away one day before the broadcast.

Can anyone read these poignant words and not feel the sadness and the deep grief that lonely widow was expressing?

Except when soft rains fall and drip from leaves, then I recall,
The thrill of being sheltered in your arms, of course, I do,
But I get along without you very well.
I've forgotten you just like I should, of course, I have,
Except to hear your name, or someone's laugh that is the same,
But I've forgotten you just like I should.
What a guy, what a fool am I,
To think, my breaking heart could kid the moon.
What's in store? Should I phone once more?
No, it's best that I stick to my tune.
I get along without you very well, of course, I do,
Except perhaps in spring, but I should never think of spring,
For that would surely break my heart in two.

In 2014, we donated most of Harry's extensive music (and book) collections to the Riderwood Village library in Silver Spring, MD.


Here's a clip of two songs with Harry's narration, from a five-CD set he recorded in 1994 at age 73. He titled the set "Sweet and Lovely."