Do you wonder why I chose the photo at the top of this website -- the small plane gliding through clouds? Harry's reflections below will explain. He wrote them in his late 80s, when he was writing more about his personal thoughts because (I believe) he knew he was "approaching the sunset of my life." Harry was especially inspired at the time by a young email companion who recently shared some of Harry's emails with me so I could post them for all of you. Below is a portion of one email.


When I was a kid I used to lie on the grass now and then after dark and look at the sky and wonder about the stars. I was a science fiction nut, and used to imagine myself in a spaceship exploring the universe and meeting intelligent beings from other galaxies and earth-like planets. Science fiction stories in those days concentrated on BEMs (bug-eyed monsters), all more intelligent than human beings, and spaceships that could travel faster than the speed of light.

I always wanted to learn how to fly, and when I was 16, I got my pilot’s learning permit. Also, by then I used to lie on the grass during the day and look at the clouds and think about them. And, one of the first things I learned when I started flying was about clouds and what they mean to pilots.

I think of clouds as God’s handwriting in the sky. What He is telling us with the clouds is what the weather is going to be in the next few hours and the next few days. All you have to do is learn to read them. Until modern technology came along only in the last 50 years or so, the people who knew the most about the weather were sailors and farmers – and that’s because their lives and their livelihoods depend a lot on the weather.

Sailors invented the saying about the sun: Red at night, Sailors delight, Red in the morning, Sailors take warning. That’s still true, has always been true and is still something to remember. Memorize it and surprise your friends some night when the sunset is especially red by telling them that tomorrow will be a delightful day. And, when the sun is red in the morning, tell them bad weather is coming within the next 24 hours, no matter what the forecasters are saying. You’ll be right nine times out of ten.

But think about clouds for a minute. You know, we see clouds in the sky almost every day of our lives – yet, hardly anyone knows the names of all the different cloud formations and what they mean as a sign of weather to come. It seems to me that everyone would be curious about them and want to know more about them. But, when I say so to my friends, they look at me like they think I’m nuts.

Anyway, I made it my business to study clouds, to learn their names and meanings. And, when I started teaching people to fly, weather for pilots was one of the ground school subjects I taught in conjunction with flight school. Meteorology for pilots, it’s called, and while it doesn’t qualify me to be a licensed weatherman, I do know a lot about the weather; but without the technical instruments used to measure weather phenomena, I can’t predict it as accurately as the professionals.


More on clouds
I found a yellowed copy of an article Harry wrote, published in The AOPA Pilot magazine, April 1964, "CLOUDS: Their Message to Pilots." (AOPA is the Aircraft Owners and Pilots Association.) Much of the article discusses technical details about clouds, but here's a non-technical excerpt:

Everyone who opens his eyes while he's awake must occasionally notice clouds in the sky. Now, clouds are one of the best visual indications as to the kind of weather you may expect to encounter during the next few hours. Some flyers no doubt regard clouds as a menace, something to be avoided at all costs -- obstructions in the sky and nothing more. But they are more, much more.

Clouds are the handwriting in the sky. Almost all weather is associated with one type of cloud formation or another. Your ability to read this handwriting and understand its significance may make the difference between a completed flight and a statistic.

The article ends with this paragraph: Any pilot who does not understand how to use the information provided by his instruments would quickly be grounded. In the same way, any pilot who cannot read the handwriting in the sky should also be grounded. 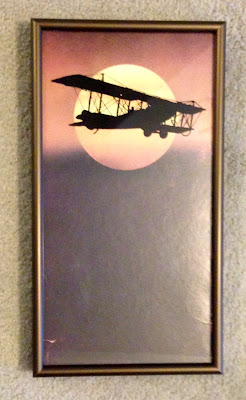 A picture worth a thousand words

To create this picture -- one of Harry's favorites -- someone photographed the plane from the sky, printed it as a silhouette on the back of the glass, and mounted the glass on the background print of the sunset. A couple months before Harry died, his son Earl replaced the old, broken frame and was ready to hang the picture in Harry's new apartment. That's when Harry mentioned that he was the pilot flying this plane. I believed him, of course; I had no reason to doubt it after I had watched him score 100% on every recent memory test. This picture is one of my earliest recollections of Harry's souvenirs. It reminds me of the Sailors' rhyme that he quotes above on this page. You could say, also, that it represents the sunset of his life. And, though we see the sun, not the moon, I think of the Frank Sinatra song, one of several Sinatra tunes that Harry asked us to play in his last alert moments on Earth. We all know it: "Fly Me to the Moon"


I'll post more about Harry's greatest passion -- flying -- in the future. For now, here's a trivia question for people who knew him: What was Harry's favorite airplane?

Posted by Harry and Elaine at 8:29 AM